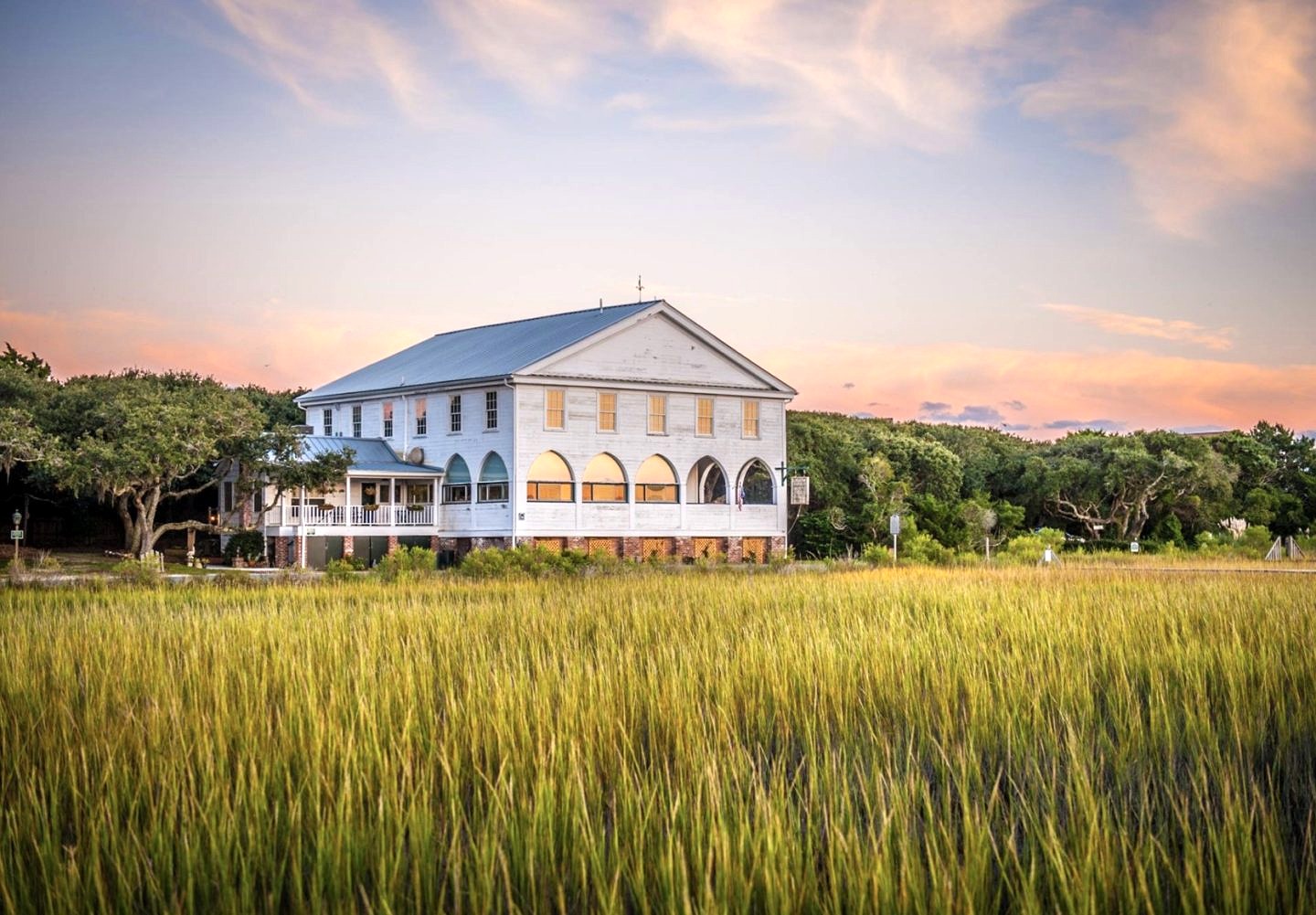 As a graduation gift from kindergarten, my parents have given each of their six granddaughters a trip to any city of their choosing in the United States.

Our eldest picked Chicago in 2008. Our youngest picked New York in 2013. Off they would go over Labor Day Weekend.

With only one child who was going to be home that Labor Day Weekend, I decided that we needed to go somewhere and not just sit around looking at each other.

My family are H U G E fans of Pawley’s Island, South Carolina. Pawley’s is one of the oldest beach resorts on the East Coast. Originally, the island was a retreat for rice planters who moved over to that three-mile stretch of sand to escape mosquitoes with their attendant malaria (the “fever” as it was once called).

My parents grew up going to Pawley’s. We would meet our grandparents there when I was little. My mother and father would rent houses there. We have friends who have houses there.

Knowing my Pawley’s devotion, I had read that the venerable old Pelican Inn had recently been purchased and was once again operating as an inn. Pawley’s used to have several inns of this type on the island. My grandmother’s cousin, Ruth Turner, once ran the Cassina Inn way back in the day. The Tip Top was another. The Seaview and The Pelican are the only two left.

Anyway, back in 2013, I made a phone call to the Pelican Inn to see if they had room for three (3) more guests for Labor Day. The lady who answered the phone said that Room 4 would be available, and, it could be ours.

I told her to please book it.

We have now been staying at The Pelican Inn for seven seasons. We have gone for the 4th of July for six years running. As we leave, we re-up for the following year.

We were telling some Charlotte friends about The Pelican Inn a couple of years ago. The friends expressed more than an interest. They demanded to be included. It took us two (2) years to get us all in for Labor Day, that’s how in demand the Pelican Inn is for its loyal guests.

We convinced another family who love Pawley’s to go over the 4th of July a couple of years ago. They got in one year and will always be back. Always. When that family found out we were going to be there for Labor Day one year…well…there were some frantic texts of jealousy.

We have the same crew for July 4th almost every year. We are devoted to that regular crew, and they to us.

This past summer some of the regulars couldn’t come. One was on safari in South Africa. Another had a family wedding. Another had to have some surgery. Such excuses.

One of our July 4th buddies pulled me aside and said, “We need to do something about this. These aren’t our people, Hamlin.”

I knew exactly what she meant as our 4th of July clique creates clannishness.

The beauty of the Pelican Inn is in her proprietors and in her guests.

As we departed from Dr. Taylor on Labor Day, she said, “At this point, y’all are those guests I don’t even have to worry about…you let yourselves in…you know where everything is…you’re self-sufficient.” We should be at this point.

The Taylors immediately took to our Charlotte pals.

About the place: the inn occupies the summer house built before 1858 by Plowden Weston, a rice planter and former lieutenant governor of South Carolina. The house was later owned by his relatives, the Mazÿck family, as well as the Atlantic Lumber Company which allowed its workers to vacation there. The Inn rests behinds the highest dunes on the Island. The Inn remains arrogantly shabby, as Pawley’s Island used to be. It is rumored that the ghost of Plowden Weston is the Gray Man himself who warns Pawley’s Island folks about upcoming hurricanes.

The Inn has the most wonderfully wide piazza in the world, crowned with Carpenter Gothic arches. The sun sets poetically through one of the western facing arches every night. The words of taps can be heard:

If you are ever lucky enough to obtain a room at the Pelican, make sure to have Dr. Taylor tell you about the pig raffle. Make sure to have Bruce Taylor explain to you why some restaurants are to be avoided.

If you are lucky enough to obtain a room there, you will have to go on a major diet for weeks afterward, because the good Dr. Taylor will feed you better than you have eaten in years. She’s a big fan of

Roasted corn on the cob

That’s just to name a few of the dishes Dr. Taylor puts on the table.

The Taylors also feed your soul. They engage in wonderful conversation. They listen. They laugh. They cut their eyes at bad behavior.

They let you in on the joke.

There are a lot of jokes.

Stay there long enough, and they’ll tell you about the other guests. And, boy, is there a lot to tell.

Stay there long enough, and Dr. Taylor may go to her storage shed and give your children Pelican Inn t-shirts.

And, no, there has been no promise of discounted rates for me by posting this.

As I tell everyone who will listen, I win the Pelican.

I have my stay down to an OCDesque order.

I get up before dawn despite my best efforts to sleep.

I head out to the gazebo lookout on top of the dunes.

I watch the sunrise.

Usually, I greet the Taylors and their morning coffee, or, they greet me.

One morning, Bruce Taylor actually arrived on the overlook with my cup of black coffee in his hand. (See, stay there long enough and you, too, can have sunrise service)

After a while, I head into the kitchen to refill my coffee cup.

I linger on the piazza with coffee and a book.

Other guests generally amble downstairs and speak, rock, visit, read, check their devices, head across the causeway to get a morning paper.

My family always emerges much more slowly than I do.

It’s a treasure to watch the sun rise over the Atlantic.

Our pals amble down.

“Hope I didn’t wake you”

A line forms at the entrance to the kitchen and dining area.

Guests take their seats at tables with their names on them.

We have been seated as a family. We have shared our tables with other guests. It matters not, as family style eating and conversations ensue. I have never had a bad table partner at the Inn.

We relish the repast.

After breakfast, most guests shuffle off to their morning activities.

I don my bathing suit and fill coolers with drinks.

I then take the leaden coolers and beach chairs to the beach.

Yeti coolers are amazing things, but, damn, they are heavy.

There are 28 stairs up the dunes to the overlook. I know. I’ve counted.

Tenzing Norgay has nothing on me.

I am the family pack mule.

I descend to the beach.

I park it in my chair and read and sweat and roast and bake in the sun.

I usually crack a cold unit or two.

Sometimes I get in the water.

Sometimes I walk down the beach, up and over the groins.

Glasses fill with water out of gurgle pitchers.

There is another impossibly gorgeous meal ready and waiting.

Then, it’s back to the beach, may be refill coolers with ice. May be not.

Move chairs with tide as needed.

After a full day in the sun, it’s generally time to switch from cold beer to cold likka around 6 p.m.

After a shower in the outside showers – which – really – is there anything better than an outside shower? No. There’s not – it’s to the room for dry clothes and wet drinks. 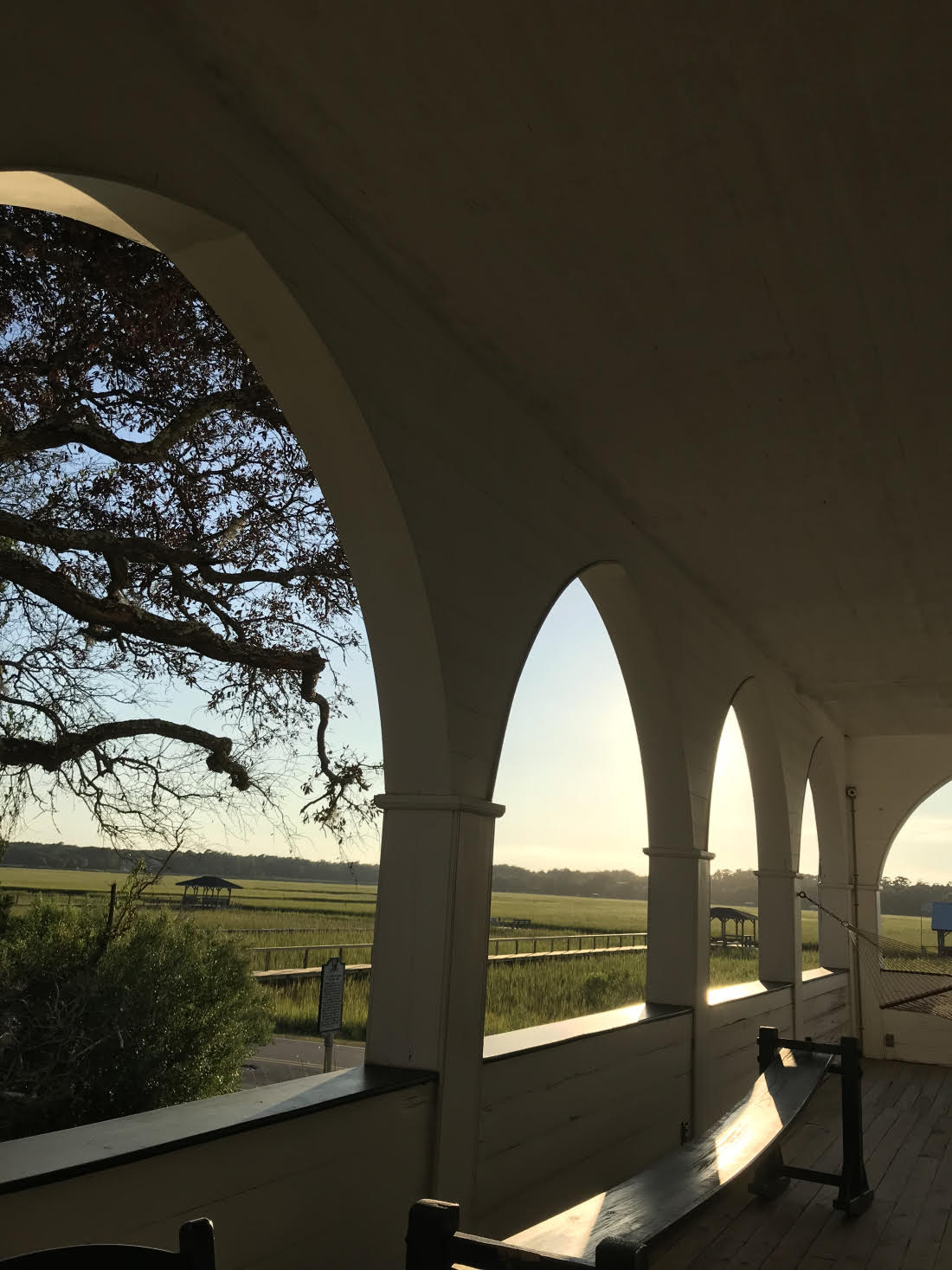 During the happy hour, a lot of the guests all assemble together on the piazza or in the living areas or out on the dock for cocktails overlooking the creek. Hilarity ensues. The world’s problems are fixed. Tales are told. Sides split with laughter.

Brush up on your story telling, as it’s a requirement for porch sitting at The Pelican.

Supper is completely unnecessary, but, we generally cobble together something.

Chicken from the grocery store?

I always want to stay up for that one last drink as I never want the party at the Pelican to come to an end.

I always want one more story or tale from the folks on the piazza.

After so much laughter and camaraderie, it’s time to hit the hay ready to do it all again the next day.

See y’all at The Pelican

G. Hamlin O’Kelley is a RCS contributor, and a fine gentleman.  We’re lucky to have his work grace our pages.