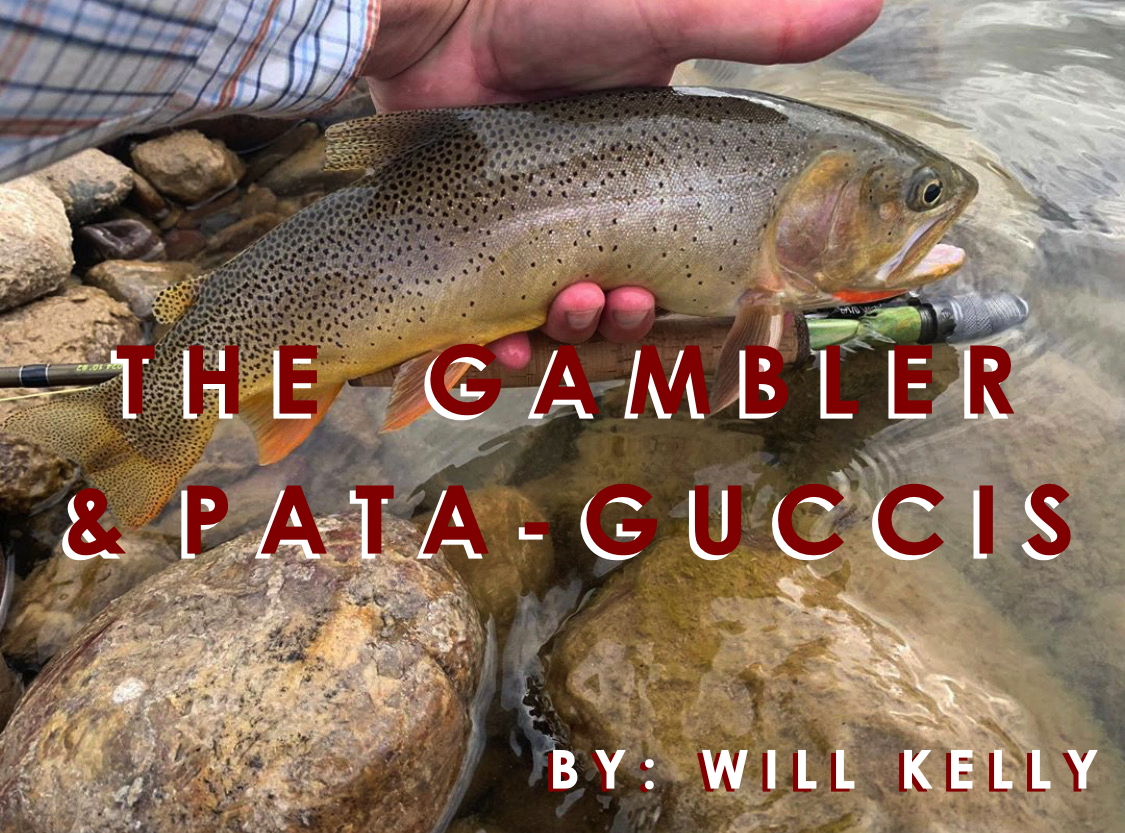 There was a silver fox, flocked in a surly beard and thick mud flap around his collar that reminded me of Kenny Rogers. He was right there in the Desperation Pool. When we pulled up in the truck, there were only about four or five cars in the upper lot– the Subaru over on the mountain-side edge was probably a couple of granolas that took off up the trail head. When we backed that big GMC to the rail you could hear the water gently tickling the rhododendron branches that separated us and the high bank. Down in there, thigh sized brown trout slept in wait hiding in the shady protection of moss and bare root undercut banks. When we put on our waders– I was the first one, the first one because I’ve put a rod and line and leader and tippet and fly and wading belt and all that together over and over for a quarter century– but more because I knew that right through the trees and down the bank was that pool. It didn’t seem from the parking lot that anybody would be in it. I could throw up elbows for us. I wasn’t racing my friends, just the notion that one guy with a rod in his trunk leaving the Presbyterian church parking lot in Ashe-Vegas might be a turn or two behind us down the mountain. So over the edge and almost in, I didnt see the fox. Then, blimp-blunk and a ripple and a perfect little jiggled out line mend to a perfect cast and I sighed, Dammit. At the origin of that well-festooned ruse was the silver headed sure footed man.

The courtesy of trout fishing dictated taking the lower section of the pool well below him. Downstream to work up in his seconds. Clearly out of casting distance, hardly out of sight on the stick-straight run– but out of the distance of rippling water with wading, tumbling a rock, or the sound of whiffing the rod– just that silent distance, but close enough no one else could fall in that aberrant generous spacing. What I could remember about the Davidson there in that section was that it fished like a conveyor belt. The factory upstream at the Wildlife Center, a perfectly straight stream with a parking lot parallel to it, just out of sight. It was designated blue ribbon or trophy or top 100 or what ever. That translated to: close to big city with big fish. On that conveyor belt I remember how you work your way up from two or three incredible holes to stick, slowly slinking upstream against a shallow bank thick in foliage. Old Kenny Rogers was there, sure footed and not moving. He would net one and you would wonder if he might ever move up. You wondered if the fish ever got tired of him. You wondered if he ever got tired of making the exact same ten foot roll cast to the exact same fish that rejected him over and over for hours– until that moment when the drift was flawless and the reflection of the fly drifted in the blind spot off the fishes shoulder– the instinctual strike. He would not move– so you covet the spot and skip over him given the chance.

The parking lot looked empty– but down in there were bodies one after another. Gaggles of college boys in their early twenties that probably carpooled and fisherman after fisherman. From what could be seen upstream, they were mostly Pata-Guccis, bodies lugging five thousand dollars worth of gear up the bank– this was the Sunday after Christmas. After while, I kept working up and realized that possibilities narrow but there are tight holding pockets, under deep banks where some trout unlimited chapter has cut back the weeping branches with a hand pruner. At some places you wish that the next guy up would get bored with his hole and move on, you look ahead and see the bridge and an inlet pipe of water they diverted for a hatchery. The conveyor belt moves up. And that day I wondered if my two friends that I left back at the truck in my lascivious anticipation to put feet in to the water were far behind. (I couldn’t get out of line to see.)

A heavy rainbow struck a unique nymph that I tied. In the solitude of the stream and the dance of the retrieve, I realized that the banks were lined like an opera hall, me on stage, with spectators- a fat woman in a red sweatshirt with no teeth and I could smell her camo clad husband’s cigarette. Up and down stream the Pata-Guccis snuck stares and the next guy down hollered loudly, What’ya usin’?— and I hollered back, Going wet and a really good presentation (and whispered, Presentation is all that matters).

When I reached the end of the conveyor belt, I walked back down and my friends were walking back up- they had hiked downstream- seemed a little put off by the crowd. Downstream is natural: wooded, pools and runs and solitude- yet Russ did say that somebody plopped an invisible Panther Martin cast in on him over a small pool and didn’t even make eye contact.

You could tell they had been stumped. At our rendezvous, that mid-point by the truck and the pool of desperation, we peered into the water. It was late and we had been there for hours and hours and time gets long sometimes when you are stumped and not catching. But in the pool by Kenny Rogers, this time with a little less etiquette in the spacing, we each slipped into the water. We slipped in without speaking. In silence, we didn’t ask if the other’s wife would care if and when we were back, well after dark. We were beckoned by the glimmering shadows and flashes of white bellies that struck into crumbs in drift. They were large. Kenny netted something like a twenty-incher and released her straight from the net, almost inured to catching fish– the kind of release that makes you wonder if he even appreciated it. He stood there for a minute- strong like plinth. You realize that he does this every day- I realize that he has been in that pool for years. He turns his head and speaks, They were biting pretty good earlier on, musta been the weather change. He disappears into the bank like a ghost and I worked my way up, slowly into the pool. As it got dark I threw a hundred or so casts. I caught three very nice fish– a thigh sized brown that will be remembered– all just before dark. All of the Pata-Guccis had long retreated to Asheville and Charlotte to polish their shoes before going back to the bank Monday. 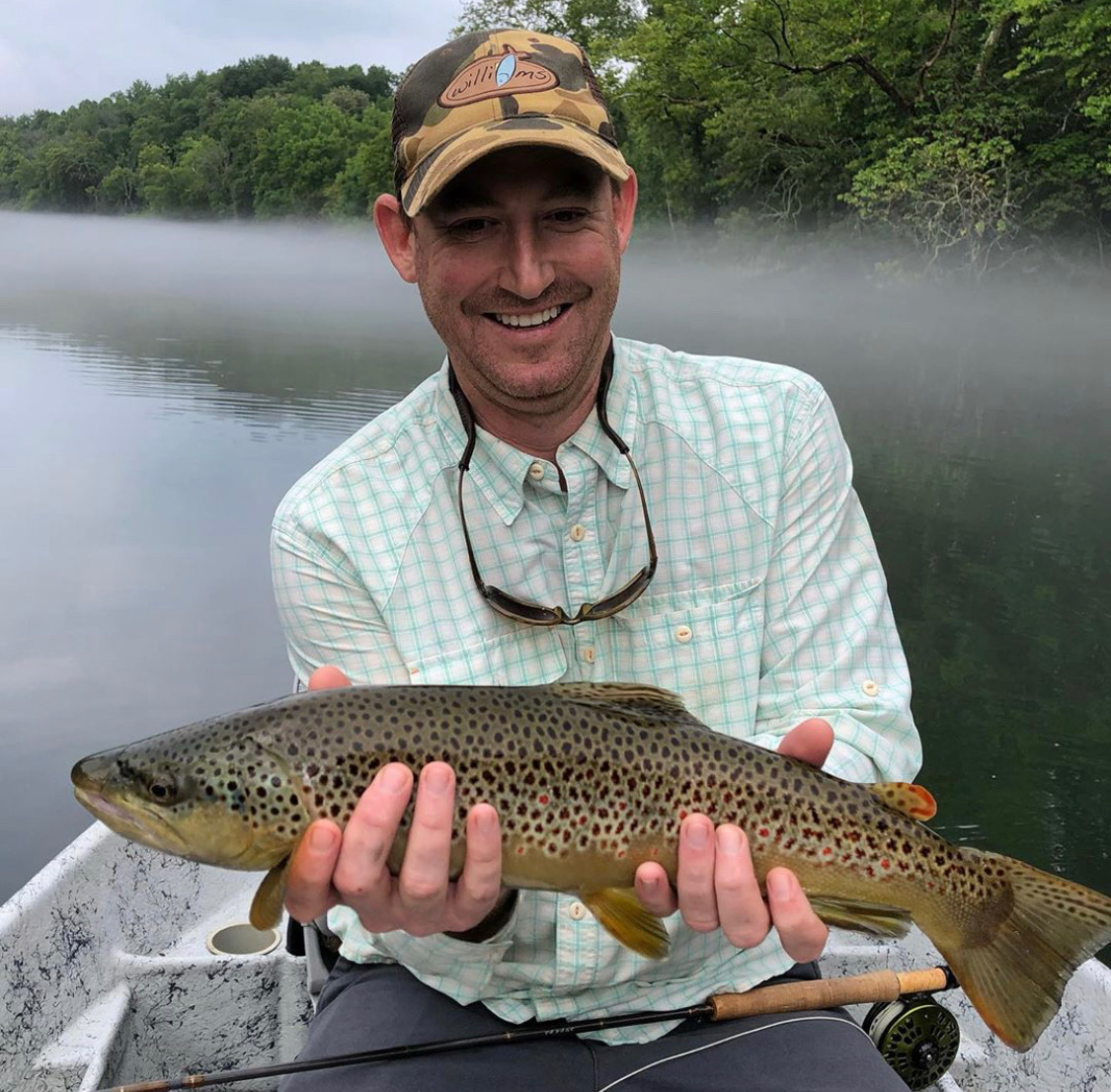 Will Kelly is a RCS contributor and a good friend.  He’s on my Christmas Card list.